Live Life to the Fullest Until the Music Stops 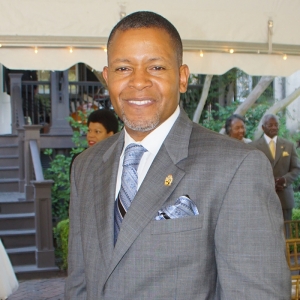 In April of 2018, Isaac Ford Jr., MSW ’12, attended the National Association of Black Social Workers Annual Conference in San Diego, California. He was excited to be a part of the 50th anniversary celebration, partake in seminars and workshops, and meet new people.

On the third day of the conference, riding down in the elevator, he struck up a conversation with two other attendees. The women, he soon found out, were from Georgia. Ford had grown up in East Augusta, affectionately known as “the Bottom.”

One of the women worked early in her career as a Child Protective Services caseworker in East Augusta. She asked Ford his family name, and they discovered that the caseworker had been assigned to his mother. The three stood in shock as Ford’s ebullient demeanor and composure crumbled, and he said, “I’m him.”

Forty years earlier, at the age of thirteen, Ford was stabbed by his mother and rushed to the hospital with a collapsed lung. The case worker he met by chance in the elevator, had cared for Ford then, and in this moment, standing in the lobby of the Sheraton San Diego Hotel and Marina. Ford broke down in tears. The caseworker quietly asked, “Are you okay?”

That chance meeting inspired Ford to write his memoir Up From The Bottom, published in 2019.

“Meeting [the case worker] had a profound effect on me,” Ford said. “It forced me to deal with a lot of ghosts from my past. I’m grateful for it.”

It takes a village

Growing up in East Augusta, Ford was surrounded by extended family, what he calls his village. His maternal grandparents had already raised his older brother, and at age 7, his mother, suffering from depression and alcoholism, moved Ford and his sister away from their father in Washington D.C. to be closer to their mother’s family.

One Saturday morning, while the 13-year-old Ford sat watching cartoons, his mother suddenly entered the living room and plunged a steak knife into his left side, puncturing his lung. Ford fell to the floor in excruciating pain, bleeding and struggling to breathe. He was certain he was dying, and began to recite the Lord’s prayer.

“I had to grow up really fast and decide whether I would allow this thing to destroy me,” Ford said. “Or I could use this painful episode to make me stronger.”

Ford chose the latter. In 1980, with the support of his family, and in spite of some lack of faith by others, Ford was accepted into the inaugural class of A.R. Johnson Health Professions High School. He had never had an interest in his studies prior to this, but the concept of a school focused on training future health professionals connected with him.

During this time, at the urging of his grandmother with whom he now lived, Ford found a way to reestablish a relationship with his mother, and they were able to create a connection that was healthy and necessary.

Ford graduated from A. R. Johnson, and arrived at Georgia Southern College in the fall of 1983. He and his best friend were roommates, and they anticipated graduating in the usual four years. Unfortunately, this initial foray into life out on his own derailed him. He drank, did not focus on his studies, and spent more nights in the girls’ dorm than his own.

“I was numbing my own pain for the first time,” he said.

Ford now understands that he was a “parentified” child―one who is obliged to act as parent to one’s own parents. Recognizing that he needed some time to mature and establish some structure in his life, Ford left college after the first year and enlisted in the U.S. Marine Corps.

The Marines shipped him out to their recruit training site at Parris Island in South Carolina. “As expected, I became a man there,” Ford said.

In September 1984, he graduated boot camp and continued on to complete his Military Occupational Specialty School (MOS) training at Camp Johnson in North Carolina.

Ford returned to Georgia as a Marine reservist, and was sworn in as a patrolman with the Augusta Police Department in 1985. He met his wife, Gwen, there the next year. Back in the city where he grew up, determined to be a champion for those he saw as undervalued and dismissed by society, he quickly saw the racism and profiling that were occurring in his force.

“My conscious would soon prove my undoing, but I didn’t care,” Ford said.

He signed a petition, along with other African American officers, condemning the actions of a white officer for his serial use of racial slurs. He spoke out about “screen testing,” a practice used by some officers in which they would speed up and then slam on the brakes, causing handcuffed suspects to smash their faces into the metal cage separating the front and back seats. Ford was fired under the pretext that his chief 'had problems’ with him.

The National Black Police Association (NBPA) heard of his firing, and a march was planned with officers from around the country, local clergy and local African American politicians. However, the chief of police and mayor of Augusta refused to meet with the NBPA, and the fight was lost.

In December 1990, Ford’s Marine Corps reserve unit was called up and deployed to Al Jubail, Saudi Arabia, as part of Operation Desert Shield and Storm.

“I was struck by the irony of being sent to fight for Kuwaiti liberation and oil, when just months earlier I was fired and persecuted for standing up for the citizens of Augusta,” Ford said.  Although he survived the conflict, he returned with PTSD, gastrointestinal problems, insomnia and depression.

Ford remained on active duty until his retirement in 2009. He became a career recruiter, and trained hundreds of Marine recruiters in public speaking, professional sales skills and recruiting strategies. He had an ease and gift for the recruitment process.

Finding a new home at USC

In 2009, Ford met Jose Coll, a Marine Corps veteran and the first director of the San Diego Academic Center of the school of social work at USC. Coll became Ford’s mentor, initially encouraging him to become a student in the MSW program then offering him a job as the center’s first recruiting coordinator.

With a new door wide open, Ford retired from the Marines after 25 years, at the rank of Master Gunnery Sergeant. He began working for Coll and USC full-time, and soon after became a full-time student.

Ford was the inaugural recipient of the 2010 Gary Sinise Scholarship, awarded to MSW students who have served in the military and want to help fellow veterans and active duty service members.  He was promoted to Assistant Director Military Diversity Outreach for the school of social work, and the position allowed him to help transitioning military and veteran affiliated families and under-represented minorities.

“I feel blessed to have USC become an extension of my village,” Ford said. “I’m very proud of a lot of things I’ve done in my life, but the culmination of things that happened in my life and me graduating from USC, and the things I was able to do there… that was one of the better chapters for me to write.”

That chance encounter at the hotel in San Diego had opened a floodgate of emotions he had not realized he had been masking. It gave him the courage to confront his memories and residual scars, and share them in his memoir.

“The message of my story is that you can grow from anything, and you don’t have to be defined by what happens to you,” Ford said.

This past semester, Kimberly Finney, clinical associate professor at the USC Suzanne Dworak-Peck School of Social Work added Ford’s memoir, and Ford, to the curriculum for Social Work 637: Assessing Wellness to Improve Recovery in Integrated Care.

Ford wanted the book to live within the field of mental health, but he never imagined it would end up as part of the social work curriculum at USC.

“As I recalled the things he was telling me he had experienced, I thought, this was perfect,” Finney said, “Amazing in terms of the dimensions of being human. A perfect assignment.”

The first person Ford asked to review his completed memoir was Finney, whom he knew and respected from his days as both a student and employee at the school of social work. When Finney told Ford she wanted to include the book in her curriculum, it was one of the greatest honors of his life, and he immediately volunteered to appear in person during her classes and talk to her students.

Finney views Ford as a role model for her students. “It's nice for them to see his developmental timeline, which is riddled with environmental and social challenges,” she said. “And then talk to him. He’s inspiring them to say, 'Be your authentic self. Don’t be afraid to be you.’”

The presence of Ford in the classroom allows the students to ask all the clinical questions they would typically ask a patient.

“That’s powerful,” said Gabriel Crenshaw, clinical assistant professor who taught four of the Social Work 637 classes. “The students are getting to ask the questions in an academic environment with the professors supervising. So, effectively they get to make a mistake and then have an immediate dialogue about it, and reframe it.”

Crenshaw emphasizes that parts of Ford’s story are universal to a lot of patients the students will see in practice. “You cannot become an effective clinician worthy of the MSW degree from a top-tier institution like USC without going through this class. This is research to practice,” he said.

Once Ford started interacting directly with the students in class, amazing things happened.

“A lot of students started to share things about their own lives, their own path,” he said. “That’s when it really hit me. This is where I want to be.”

Ford wants to continue to talk to as many people as he can about his experiences, specifically at-risk youth and the people who work with them.

“It’s healing for me too,” he said. “The more I’ve tried to help other people over the years, the more I’ve helped myself.”

In 2012, Ford’s mother died of pancreatic cancer. On his last call with her, he was able to tell her that he loved her unconditionally, and no longer needed her to apologize, because he had already forgiven her.

Ford will be speaking at the USC Black Alumni Association’s “Lunch and Learn” event on January 15, 2020. Please RSVP. All are welcome to attend.