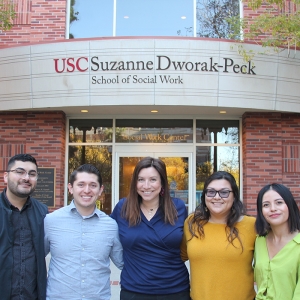 According to the latest data available, in 2017 the United States received an estimated 139,801 affirmative asylum applications from individuals such as these:

Persons who have survived physical and psychological trauma are eight times more likely to win their asylum cases with a forensic medical or psychological exam, which is an evaluation performed to corroborate claims of maltreatment suitable for use in a court of law.

Reacting to the ever-growing need for appropriately trained forensic providers and press reports of overwhelming health violations at detention centers, students at the Keck School of Medicine of USC, decided they needed to act.

The mission of the clinic is to advocate on behalf of asylum seekers by providing pro bono forensic medical and psychological evaluations; to educate medical students on these evaluations and help them gain experience as advocates for health and human rights; and to train physicians to perform forensic evaluations.

Social work joins the cause

Kristen Zaleski, clinical associate professor at the USC Suzanne Dworak-Peck School of Social Work, was one of the first to volunteer with KHRC. It quickly became apparent that the amount of requests were piling up and more help was needed.

Cynthia Willard, MD, clinical assistant professor at Keck and faculty chair of KHRC at the time, asked Zaleski to take over the psychological side of the clinic and train social workers to do evaluations.

In August of 2019, under the supervision of Zaleski, the Suzanne Dworak-Peck School of Social Work branch of the Keck Human Rights Clinic was established, making it one of only three sites in the country that collaborates outside of its medical school to include other disciplines within its volunteer evaluators.

“This is the only social work school I know of that has a human rights clinic,” Zaleski said. “This is a synergy where we have active social work students, faculty and alumni working together to promote human rights. I think that is amazing, and a hard thing to do where we’re all uniting.”

During this past fall semester, Zaleski recruited four first-year Master of Social Work (MSW) students and a recent MSW graduate as volunteers. For the MSW students, this means volunteering their time to work as student case managers on top of their full-time classes and 20-hour a week internships. Starting in April 2020, two more student case managers will be added due to the high demand of cases.

Carly Steinberger, MSW ’19, volunteers her time to serve as the clinic scheduler and is also shadowing and learning about forensic evaluations, in addition to her full-time job as an early childhood mental health therapist.

What strikes Steinberger the most is how much an evaluation helps a person’s chances of gaining asylum. “Getting asylum in the United States is very difficult, so it’s a great thing if we can assist people in that process,” she said. “That’s what draws me to this.”

Steinberger and the MSW student volunteers underwent the same eight-hour training course required of all physicians and clinicians to understand the process of assessing individuals for the legal system. Through their positions, they are broadening their understanding of the issues, policies and practical communication techniques of forensic evaluations.

“I'm starting to be exposed to the logistics of everything, how it runs and how it works,” said MSW student Gael Lagunas, one of the volunteer case managers.

How the clinic works

The process of accepting those seeking asylum at the clinic begins with an attorney reaching out to KHRC with brief details of a case. The KHRC case managers then refer clients who need only psychological evaluations to Zaleski and her team.

“Okay, so we have a 27-year-old female from Honduras who is reporting severe trafficking and violence, and if she returns to Honduras she is afraid she will be murdered,” Zaleski explained.

Zaleski and Steinberger will work with the attorney to determine the focus of evaluation. In the case of the woman from Honduras, they noted that she should be further evaluated for post-traumatic stress disorder and the details of the violence she endured so that there is documentation for her court case. Steinberger will then schedule the clinician who would be appropriate for the psychological evaluation.

Next, the woman is referred to one of the MSW student case managers, who coordinates with the attorney handling her case and the clinician to schedule the assessment. The MSW students take notes during the evaluation, and as they receive more training, they will be able to participate with direct questioning.

When MSW student case manager Yareli Contreras is in the room during an evaluation, as a client is sharing their experiences, she assesses whether there are any outside resources available for them that she might be able to offer. For example, while the clinic does not provide therapy, they are able to offer referrals for mental health services, or English as a second language courses, furniture and clothing resources―whatever the student case manager might glean is needed by the client.

Mary Cheffers, MD, clinical assistant professor of emergency and family medicine (clinician educator) at Keck and current faculty chair of KHRC, explained that when the medical students were evaluating and assessing clients’ needs in general, they were not exposed to where to find resources to help the clients going forward. Teaming with social workers, who are trained to know what resources are available, helps teach the medical students about taking care of this population.

Experiencing the reality of labor trafficking

The clinic also sees many cases involving individuals seeking asylum from labor trafficking, a form of modern-day slavery in which individuals perform labor or services through the use of force, fraud or coercion.

“It was interesting because I never really considered labor trafficking happening in our community,” Contreras said. “We only see it on television or on the news in other cities, but it’s real where we are too.”

Lagunas coordinated and shadowed a case involving a man who had been labor trafficked from the Philippines.

The man was approached by a recruiter while he was working in the Philippines, offered a good paying job and comfortable living conditions in the United States, then guided through the process of obtaining a visa and given a plane ticket.

He was brought to an apartment in the U.S. filled with 25 people. His passport was taken, and he and the others were only allowed to go to work and back to the apartment, always under someone’s watch. There was no free time, no outside time. The man was only able to flee his traffickers because his passport was returned to him in order to be transferred to another location, and he used that opportunity to escape.

“It’s very surprising how slick the people who run these organizations of trafficking are,” Lagunas said. “How invisible they can be when we're not paying attention.”

The part of the man’s story which Lagunas found particularly eye-opening was the way in which he cleared customs at the U.S. airport. From the man’s story, it seemed very clear to Lagunas that somebody within U.S. customs was aware that he was being trafficked and orchestrated him to be whisked through with little attention.

Benefits for the students as they help others

The goal for Zaleski in bringing first-year MSW students into the clinic is for them to be fully versed in asylum law and immigration practices, and how human rights connects to those, and be specially trained in forensic psychological assessments by the end of their MSW program.

MSW students are being taught the basic principles of human rights and how social work meets the needs of people who have gone through horrific trauma.

“These students are learning about themselves, their privilege and understanding the social work ethos of human rights and social justice,” Zaleski said. “Whether they continue to volunteer with our clinic or bring that into a whole different field, I’m hoping that they’re getting the building blocks that will never leave them and they will use in whatever career they choose.”

For Steinberger, volunteering for the clinic balances out her work as a mental health therapist, allows her to tap into a different sector and brings her into contact with the legal system. Lagunas has broadened his exposure and awareness of immigration issues, allowing him to put faces to the statistics. Contreras has increased her skills in effective communication and providing support for clients, and gained experiences that add to her overall social work toolkit.

Expansion into a collaborative

In February 2020, the Keck School of Medicine of USC, the USC Gould School of Law and the USC Suzanne Dworak-Peck School of Social Work applied jointly for grant funding from USC to provide a center for medically vulnerable and psychologically traumatized individuals in the asylum community of Los Angeles.

“We want to be able to have the three of us have a portion of our faculty based in the center so we can create an immigration research and clinical service center,” Zaleski said.

“The dream destination is the collaborative,” Cheffers added.

The Keck Human Rights Collaborative would be able to expand the human rights curriculum within the university and establish a research branch related to asylum and immigration topics, open to all schools within the university, in addition to continuing to provide forensic medical and psychological evaluations. The goal is to become an interdisciplinary and coordinated center for wellness, education, research and wrap-around services for traumatized individuals in Los Angeles and the surrounding area.

In the meantime, Zaleski is continuing to make connections with faculty at other USC schools who have human rights-based initiatives. One is Jonathan May, research assistant professor at the USC Viterbi School of Engineering, who is working on an artificial intelligence project that would help people who do not speak common languages apply for asylum when they reach U.S. borders. Right now, according to Zaleski, if an individual speaks an uncommon tribal language it can delay their application for months or years, and many will live in detention while a translator is located.

“We applied for this grant to help get everybody who is working on these little intersections into one room,” Zaleski said. “Let’s create something awesome that can be nationally recognized in changing asylum services.”