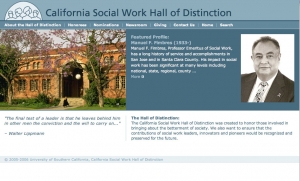 To increase awareness of social work history and the pioneers who made it happen, the USC School of Social Work’s California Social Welfare Archives has created a project designed for incorporation into social work curricula throughout California.

Focused on the archives’ Hall of Distinction, which recognizes social workers who have made outstanding contributions to the advancement of social welfare and social work practice in California, the Future Leaders Project strives to increase students’ understanding of the history of the social work profession and to familiarize students with the Hall of Distinction as a resource for such information.

“There are so many inspirational moments in social work history,” said Esther Gillies, president of the California Social Welfare Archives. “We want students to learn how social problems were addressed in the past and about the kind of passion and determination it takes to take on such issues.”

Students are asked to choose one of the social work leaders featured on the Hall of Distinction website and either give an oral presentation or turn in a written report on that person’s accomplishments, as well as the importance of honoring such leaders and the knowledge gained from doing the assignment.

The project has been a part of the School of Social Work’s curriculum for three years and has been well-received by students and faculty. Jon Sager, a clinical associate professor who has been using the assignment in his classes, said he is pleased the Hall of Distinction offers a resource highlighting people whose contributions to social welfare are significant but whose names may not appear in textbooks.

“I find it particularly uplifting when a student ‘discovers’ someone they had never heard of who had done something they find amazing and so crucial to social welfare,” Sager said. “It gives students a realization that someone had to start a particular service or create that agency. The Department of Mental Health and the Department of Children and Family Services didn't just magically appear -- there were people who made it happen.”

Classes at California State University, Northridge, used the assignment this summer, and the Hall of Distinction committee, which is made up of prominent social workers from across California, will be working to expand the program to other schools.

“Learning about leaders in social work gives students confidence and the inspiration to learn the tools that make a difference,” Gillies said.