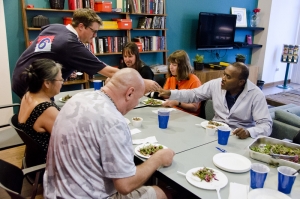 The time-honored tradition of cooking and sharing a meal with others is at the center of a new program called Nourished that seeks to create community between student volunteers and people who have experienced homelessness in Los Angeles.

The concept is simple enough. USC students gather with residents at a permanent supportive housing facility on the edge of Koreatown once a week to cook healthy recipes and eat together. They share stories and chat about current events.

But interviews and focus groups with residents and volunteers hint at the development of a deeper connection and the cultivation of a sense of belonging.

“The neatest thing is how it brings people out of the housing here and gets them together,” said Fred Banks, a resident who has attended many of the Nourished events. “We might have karaoke or a dance, but when you have a meal with somebody, it’s totally different. It builds relationships and makes people come together more closely.”

Launched as a pilot project earlier this year by researchers at the USC Suzanne Dworak-Peck School of Social Work and leaders at the USC Caruso Catholic Center, the program has focused on going beyond a simple meal program for people who have experienced homelessness.

“Nourished is unique in that it changes people’s lives in a more substantive way than just giving them a meal or trying to meet their immediate needs,” said Jack Lahey, cofounder and program manager of Nourished and a recent graduate of the school’s MSW program. “It can change their perspective on their community and their lives.”

The initiative originated from conversations among Lahey, Benjamin Henwood, an assistant professor at the USC Suzanne Dworak-Peck School of Social Work whose research involves homelessness, and officials at the Caruso Catholic Center who sought advice on developing a program that would get USC students involved in issues related to homelessness.

Although they emphasized that charitable programs that provide food and clothing to individuals experiencing homelessness are critical and should continue, Nourished organizers envisioned a program with more of a focused approach to building connections.

“I wanted to move our students toward looking at systemic issues and social justice and to move beyond charity,” said Rosie Shawver, the center’s director of campus ministry. She added later, “Misconceptions are broken when you encounter somebody and build a relationship with them. If you are on Skid Row and handing out sandwiches, that encounter can happen but it might be shorter and isn’t intentional.”

The initiative is certainly timely. The university recently convened city officials, service providers and other stakeholders to launch a collaborative effort to address homelessness in the region. The program also fits well with the American Academy of Social Work and Social Welfare’s Grand Challenge to End Homelessness, a national effort headed by Henwood and other homelessness scholars.

Nearly 50,000 people experienced homelessness in Los Angeles last year, prompting city officials to declare a state of emergency and earmark $100 million to tackle the issue. The city is slowly shifting from what experts describe as outdated and ineffective shelters to placing individuals in permanent supportive housing, where they receive wraparound services such as ongoing medical and mental health care, case management and referrals to other providers.

Although that approach, known as Housing First, fulfills the needs of many people transitioning from the streets into housing, Lahey said critical gaps remain. Some individuals living in supportive housing struggle to access healthy food and often grapple with loneliness.

“A big barrier for them has always been social isolation and a real lack of community integration,” he said. “By having these meals in a group format in a casual way, we hope to bridge that gap and create a community that extends beyond the housing site and university campus.”

At a recent Nourished event held at the Koreatown complex managed by PATH, a nonprofit organization dedicated to addressing homelessness via housing and customized supportive services, volunteers chopped onions and garlic for a lentil and vegetarian sausage soup.

By the time the ingredients hit the stove, a few residents had trickled into the community room to chat and occasionally stir the soup as it came together. Others helped prep an arugula salad with roasted chicken, beets and goat cheese.

As residents and students mingled, then sat down to eat, the conversation flowed naturally from one topic to another — first the Olympics, then politics and later to the impending football season.

“We give them the space to just sit and hang out. We don’t come to conduct some sort of business for them. We are there to be present for them,” said Julia Morreale, who helped Lahey launch the program while working in the Jesuit Volunteer Corps and serving as a social justice intern at the Caruso Catholic Center.

A PATH resident who goes by the nickname Tel said he appreciated the fact that the student volunteers don’t seem to have any hidden agendas or other reasons for participating in Nourished beyond wanting to spend time with people living in the supportive housing community.

“I get to talk to different people, a bunch of youngsters who have different opinions and ways of thinking,” he said. “It is stimulating. I was asking them, why are you here on a Friday evening when you could be out on the town? They said they want to be here.”

If Nourished does have an agenda other than creating a community, it’s promoting healthy eating habits. Too often, people living in supportive housing don’t have access to consistent and nutritious food, Lahey said, and instead rely on poor-quality, highly processed products.

After the event ends, participants also receive a single portion of ingredients already prepped and ready to assemble as a separate meal.

“Almost everybody said it has had an impact on their diet, food habits, cooking meals in their unit, knowing how to shop and what to purchase and consuming more fruits and vegetables,” Lahey said.

Although Banks said he has always tried to stay away from greasy foods apart from the occasional steak or hamburger, he has enjoyed the program’s focus on healthy eating.

“They are introducing how good turkey meat tastes, how ground-turkey tacos taste, stuff that is a little better for you, a little less grease,” he said. “You can make tofu taste good. It’s awesome and it fills you up.”

Another aspect of Nourished that organizers hope to expand as the program continues is an oral history component in which residents talk about their past experiences.

Many people living at the supportive housing facility suffered through the draconian policies toward homelessness of the 1980s and 1990s, Lahey said, and having the opportunity to describe their life will add to the historical narrative and help them feel like they are being heard and acknowledged.

So far, only a few residents have participated in the oral history initiative, but there is confidence that as Nourished becomes more established, others will want to add their story to the record.

“There is something about preparing a meal together and sitting together at a table that makes people want to share their stories,” said Jaclyn Nguyen, a student volunteer.

The Los Angeles native has attended every meal since the program started and is hopeful that other students at USC will get involved in Nourished.

Volunteers receive training on the causes of homelessness and promising interventions, in addition to a copy of a book coauthored by Henwood titled Housing First: Ending Homelessness, Transforming Systems, and Changing Lives.

A few dozen students have already expressed interest in participating this fall, Lahey said, and discussions are underway to expand Nourished to other housing facilities in Los Angeles. Morreale, who is now attending law school at Golden Gate University in San Francisco, is working with organizations to start a Bay Area branch of the program and envisions creating a network of universities with Nourished initiatives.

“We can go beyond the gates of USC. We can go beyond what we’ve learned and previous notions we’ve had about these folks,” she said. “Our big goal is to get everybody involved. We need everybody, our whole community, to join us in this effort.”