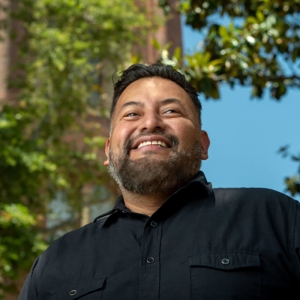 Many people fear the places Hector Jiminez needs to be. He relies on his battlefield experience — and his studies at USC, where he’s earned two graduate degrees — almost every day.

In environments where gang violence stalks communities, Army veteran Hector Jiminez is unafraid. He served eight years in Iraq and Afghanistan in the 1990s before returning to Southern California, where he followed a meandering path to a military social work degree at USC.

“I grew up around USC, but I took the long, scenic route to get an education here,” he said. “I ended up where I needed to be.”

Jiminez needs to be in Los Angeles neighborhoods designated as Gang Reduction and Youth Development zones, where gang-related crime is four times higher compared to other parts of the city. Young people in these zones are hounded by the potential for violence, a situation not unlike combat.

“These are the kids we’re trying to reach,” Jiminez said. “There’s peer pressure, and sometimes they don’t really have a choice. They need protection, and they can’t see any other way. If you can put yourself out there, you can understand that.”

Jiminez, 50, admits struggling to find his way when he returned from active duty. He worked a series of jobs, including a stint leading USC’s Campus Cruisers — a program that provides safe rides after dark.

After earning a business degree at California State University, Los Angeles, he made his way to USC for two graduate degrees. The first was an Executive Master of Leadership from the USC Price School of Public Policy in 2015. Then came a master’s from the USC Suzanne Dworak-Peck School of Social Work, which will be conferred on May 19.

Jiminez followed the military social work track, then chose to direct his career toward gang diversion and prevention at Soledad Enrichment Action.

“Hector’s got a lot of life experience, and he doesn’t blink,” said Mirna Romero, director of operations at Soledad Enrichment Action. She met Hector when they were both studying at USC. “He won’t back down, but he’s a peacemaker. He’s got this empathetic side, which is a combination you need for this work.”

That work includes developing the talents of at-risk youth and guiding those who’ve been given a second chance by the criminal justice system.

“People are surprised sometimes when they find out what I do,” Jiminez said. “They might say, ‘That’s a really dangerous job.’ My military background says it may be dangerous, but you’re there for a reason.”