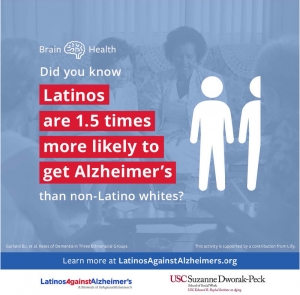 Unless a medical breakthrough is discovered that prevents, cures or slows the progression of Alzheimer’s disease, the incidence and cost of Alzheimer’s on U.S. Latinos will grow exponentially by 2060, according to a report released today by the USC Edward R. Roybal Institute on Aging at the USC Suzanne Dworak-Peck School of Social Work and LatinosAgainstAlzheimer’s, a network of UsAgainstAlzheimer’s.

According to the report, “Latinos & Alzheimer’s Disease: New Numbers Behind the Crisis,” U.S. Latinos living with Alzheimer’s disease are projected to increase from 379,000 in 2012 to 1.1 million by 2030 and to 3.5 million by 2060 – a growth of 832 percent. In addition, the report released unprecedented findings on the cumulative direct and indirect costs of Alzheimer’s disease on the U.S. Latino community, including millions of family caregivers, which would ultimately cost the U.S. economy $373 billion by 2030 and $2.35 trillion (in 2012 dollars) by 2060.

“This timely report provides strong evidence of the rapidly escalating burden of Alzheimer’s disease on the U.S. Latino population,” said William Vega, co-author of the report and executive director of the USC Roybal Institute on Aging. “It is not only the growth of the prevalence that is concerning. It is also the very high metabolic syndrome and diabetes rates that are fueling the increase in Alzheimer’s to levels well beyond expected rates in the U.S. population.”

The report’s data sparks renewed urgency to address health care disparities affecting minorities, particularly U.S. Latinos. Because of advanced aged and socioeconomic determinants, U.S. Latinos are 50 percent more likely to get Alzheimer’s than non-Latino whites, yet are less likely to receive a diagnosis from a physician. Despite an increased prevalence for Alzheimer’s and other diseases, clinical trial participation among U.S. Latinos is extremely low at approximately one percent, punctuating the need for increased efforts to engage U.S. Latinos in clinical research.

As outlined in the report, the direct cost of Alzheimer’s includes expenditures for medical and long-term care, while indirect costs include unpaid informal care and earnings lost by people with Alzheimer’s disease. While U.S. Latinos are more likely to seek care options that are more affordable than non-Latino white Americans – for example, choosing adult day care vs. nursing home care – the total cost of Alzheimer’s on U.S. Latinos will still outpace the cost for non-Latino whites.

“Latinos living with Alzheimer’s disease rely more heavily on informal care than more expensive options like nursing home care,” said Shinyi Wu, co-author of the report and senior scientist at the USC Roybal Institute on Aging and an associate professor at the USC School of Social Work. “Due to demographic and family structure shifts among Latinos, there will be a lower ratio of younger generations able to take care of older generations living with Alzheimer’s, placing significant societal and economic stress on Latinos.”

“Caring for my mother with Alzheimer’s is draining, but I know that it is the most important job I’ve ever done,” said Daisy Duarte, a caregiver and advocate for the LatinosAgainstAlzheimer’s Network. “Every penny I earn goes to my mother’s care, and sometimes I feel like my dreams are slipping away. I have hope, but we need help, and we need a cure.”

A goal of the report is to make sure the nation is prepared to address these disparities. To that end, the authors outlined a host of solutions that need immediate action:

“Latino families are increasingly in the crosshairs of this growing public health crisis and are among the least resourced to deal with the financial demand Alzheimer’s places on households and on family caregivers,” said Jason Resendez, a co-author of the report and executive director of the LatinosAgainstAlzheimer’s Network and Coalition. “As the U.S. Latino older adult population grows dramatically over the next 30 years, Alzheimer’s will have far reaching implications for our nation’s healthcare system and economy if nothing is done to curb its devastating effects.”

The release of the report will be followed by the inaugural 2016 Alzheimer’s and Dementia Disparities Summit on September 27 in Washington, D.C., hosted by UsAgainstAlzheimer’s Latino and African American Networks and Leaders Engaged on Alzheimer’s Disease (LEAD Coalition). The summit will bring together Latino and African American community leaders, caregivers, government officials, healthcare professionals and industry leaders and will focus on developing strategies and recommendations to curb the impact of Alzheimer’s and dementia on communities of color.